A sweet souvenir from one of the most iconic weddings of the 21st century can be all yours — but it’ll cost you.

Four slices of cake from Prince Charles’ and Princess Diana’s 1981 wedding are going up for auction next week, and if the public’s fascination with the late royal is any indication, they’re bound to sell like hotcakes.

An online listing on the Dominic Winter Auctioneers website estimates that a single slice of the 40-year-old cake will sell for $277 to $416 when the auction goes live on Aug. 11, making it one pretty pricey dessert.

Of course, the cake isn’t exactly meant to be eaten — unless you feel like breaking a tooth — but folks eager to own a piece of royal history won’t likely mind.

According to the listing, the “large slice of cake icing and marzipan base” comes from one of the 23 wedding cakes that were made for the 1981 royal wedding and likely came from the side of the cake or the top of a single-tier cake.

It originally belonged to Moyra Smith, who worked for the Queen Mother, and the auctioneers believe it must’ve been sent to the Clarence House staff to enjoy. In 2008, Smith’s family sold the cake to Dominic Winter Auctioneers.

Most 40-year-old cakes would be in rough condition, but this one seems to have been preserved nicely in cling wrap, placed on a card/tin-foil base and stored in an old cake tin.

“It appears to be in exactly the same good condition as when originally sold, but we advise against eating it, and the royal letter and bottle of commemorative beer that accompanied the lot are not present,” the auction listing reads.

Related: Queen Elizabeth avoids starch, likes to drink and generally keeps it simple. Her former chef says she’s “not a foodie,” unlike her husband.

Even so, the auctioneers are throwing in a few other royal souvenirs to make up for the missing elements: a printed program for the St. Paul’s Cathedral ceremony and a program for the Buckingham Palace royal wedding breakfast.

The ornate cake weighs 28 ounces and the white icing is decorated with the royal coat of arms, a leaf spray and a small silver horseshoe.

Eager buyers can set up an appointment to view the cake on Aug. 9 or 10 and on the day of the auction, live bidding can be done in person, online, via telephone or absentee bidding.

Once the news broke, social media users took to Twitter to express their surprise that a piece of cake from the royal wedding was still around.

The thought of spending hundreds of dollars on a slice of cake that you can’t actually eat was enough to make one social media user sob.

But this isn’t the first time that an edible piece of royal memorabilia has been auctioned off. In 2017, a single slice of Prince William and the former Kate Middleton’s eight-tiered fruitcake went on auction. Estimates for the six-year-old piece of cake set the price between $1,000 and $1,550.

Related: You could win yourself a slice of history when a piece of old cake from the wedding of Prince William and Duchess Kate goes up for auction.

The following year, one of the eight tiers from the couple’s wedding was served at a private tea at Clarence House following the christening of Prince Louis. The parents of three also broke out the leftover cake at the christenings of Princess Charlotte and Prince George. 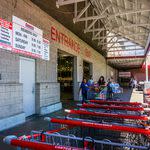