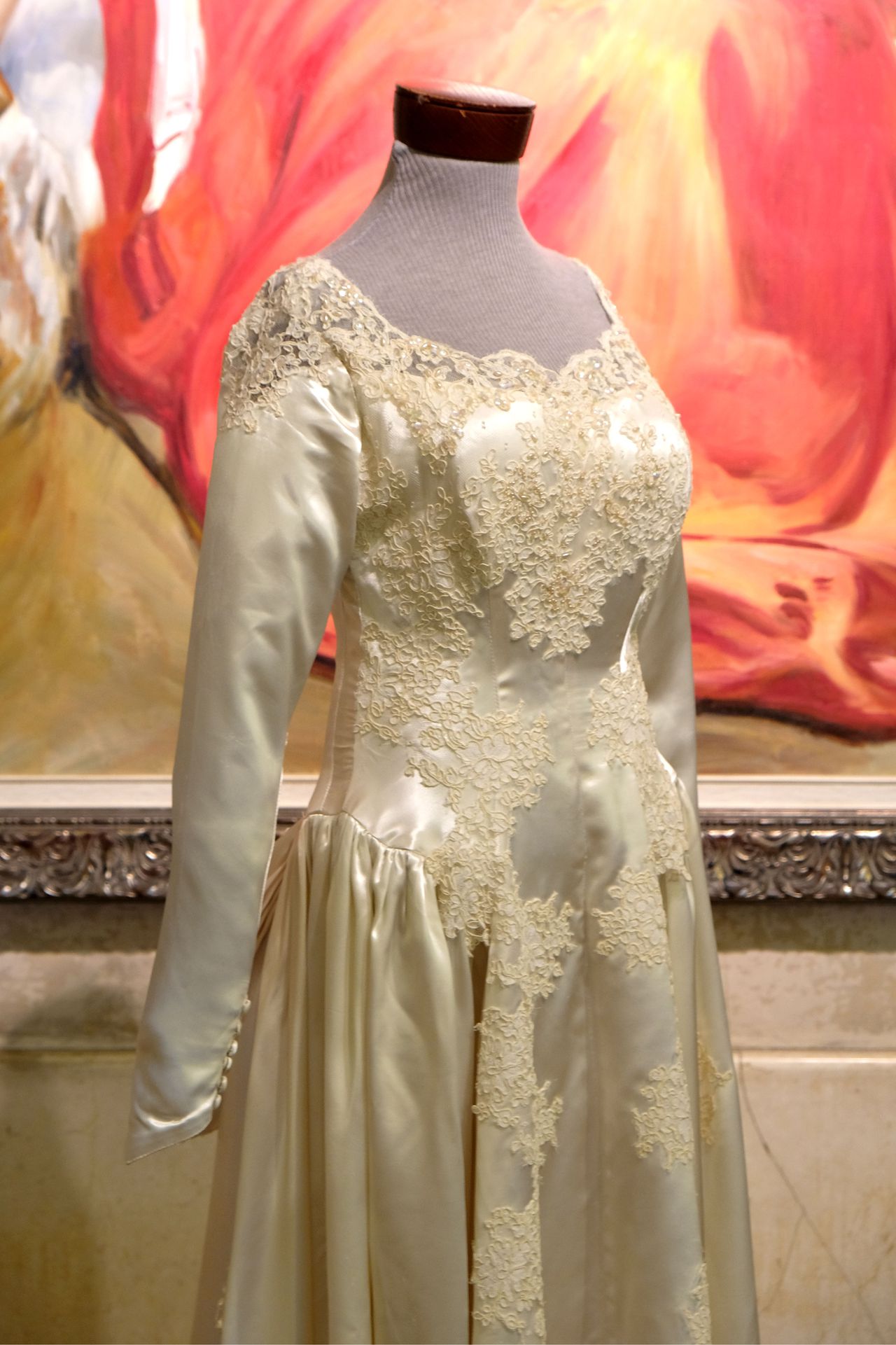 The exhibit showcases the museum’s wedding dress collection and loaned items from the Victorian age to the modern era. Visitors can preregister to visit at designated times through Aug. 25 on the Wistariahurst Museum website. A donation is suggested.

The dresses are displayed on the former Skinner mansion’s elegant first floor, from the winding staircase to the stately music room favored by socialite Belle Skinner.

Penni Martorell, the exhibit’s curator and the museum’s acting director, stood next to a brown gown worn by Minnie Bryant Parsons in 1886. She said colorful dresses were typical and used for occasions besides weddings. The white wedding dress became the rage after young Queen Victoria donned one for her beloved Prince Albert in 1840.

Martorell said the exhibit has attracted a steady flow of visitors, a way to celebrate the home’s reopening after COVID-19 lockdowns.

“It speaks to our particular audience who like textiles, styles and fashion,” she said. “We didn’t want to make it just about the wedding gowns. We wanted to make it about humans’ relationship clothing.”

Visitors are asked questions along the way, including how they view their taste in wardrobe or why they hold onto certain pieces like a wedding gown.

“What is it about humans that we want to save those memories?” Martorell wondered.

During an inventory of the museum’s collection, assisted by volunteers Betsy Wood and Joanne Picard, Martorell found boxes with multiple dresses in them. Every day revealed a surprising find, she said.

Martorell favored a gown from 1915 that features a sheer fabric and beading.

“Skinner satin and Skinner fabric were here for a long time until 1950,” she said of the mills operated by the family starting around 1874. “A lot of these dresses were made from that material that they produced in Holyoke.”

According to Sarah English, the museum’s event coordinator, conversations on the exhibit began two years ago.

“We thought it would be a great opportunity to get the dresses out and let the public see them,” she said. But, unfortunately, COVID-19 delayed the opening by a year.

The dresses represent centuries of fashion, from a gown stitched together in 1850 to more familiar styles of the mid-20th century and early 2000s.

“A lot of them have a very Holyoke tie, and the weddings took place in Holyoke,” English said, noting some of the gowns were worn by Skinner descendants.

The donated dresses arrived at Wistariahurst in various states, requiring light steam to get wrinkles out.

“We decided not to change anything in that regard. There are stains on some of them, and we spent hours and hours steaming them to smooth out the silk,” English said. “Other than that, we didn’t do any major repairs. You see them as they were worn and as they were put away by their owners.”

An ivory satin gown worn by Charla Emerson Bidwell in 1949 stands at the foot of the main staircase. Bidwell worked as a curator at the Holyoke Public Museum and Library when she married Edward Bidwell at Mount Holyoke College’s Skinner Memorial Chapel.

Bidwell’s Skinner satin gown was adorned with “lattice-beaded shoulders, princess seams, and covered buttons and sleeves and back.” The label along the neckline reads “Hope Thayer.” The gown is part of the museum’s permanent collection.

For her wedding in 2013 to Glenn Berninger, Elizabeth “Liz” Hamlin wore a dress with a light pink bodice decorated in delicate beading, a testament to the bride’s refined taste and fashion-forward thinking. After a ceremony at Mount Holyoke College’s Abby Chapel, the newlyweds arrived at the Holyoke Canoe Club by motorboat for their reception.

The exhibit notes that “Liz passed away untimely, and this gown is providing a connecting thread to Liz’s life and spirit — a physical, tangible, remaining connection to her — for her husband, her family, and her friends.”