Saving money on groceries can be a challenge — especially if you shop without having (at least a few) cost-cutting strategies up your sleeve.

Before you head to the store, however, savings expert Lisa Thompson of Coupons.com suggested first evaluating your grocery budget. “For most people, this part of their budget is very flexible, and if they’re careful, they can usually shave off $5-$10 a week by buying store brands or skipping impulse buys.”

Thompson also recommended challenging yourself to stick to a budget that’s slightly smaller than you’re used to by putting aside the cash at the beginning of the month for your groceries and then striving to only spend that amount. “Add coupons and cash-back offers for items you already buy to stretch those dollars: You can think of coupons as ‘free’ money in a way,” she said.

Here are six additional ways you can stretch your grocery store dollars.

See: 16 Ways To Save Money on Food
Learn: Supermarket Buys That Are a Waste of Money

Don’t Shop on the Weekends

Sometimes, the weekend may be your only opportunity to shop, but if you want to save, you should avoid doing so, according to Shannon Vissers, a shopping and retail analyst at Merchant Maverick.

“Besides being more crowded, grocery stores also have higher prices on the weekends, particularly on meat,” she said. “By Tuesday, meat prices are usually much lower than they were over the weekend. Other foods like bread, ice cream and wine are also cheaper during the week. Tuesdays and Wednesdays are generally the best mid-week days to grocery shop.”

Rebecca Brooks, financial coach and owner of R&D Financial Coaching, said that she tells her clients to “shop the store backward” to save money on groceries.

“This is effective because of the way the stores are most often laid out,” she said. “By putting healthy, low-cost food up front it’s easy to make a lot of healthy budget-friendly choices. But as you proceed through the store, you start to experience a decrease in willpower. As a result, you are more likely to impulse shop, putting items in your cart you would not otherwise buy, inflating your bill, and possibly your waistline! So next time you’re at the grocery store, start your shopping in the back of the store when your willpower is at its strongest!”

If you’re in the habit of buying strictly organic produce, you often pay more (sometimes double or more) than you would for nonorganic produce, according to USDA research. Although paying a premium for pesticide-free produce makes sense for some fruits and vegetables, money-saving expert Andrea Woroch said you can save money by buying organic selectively.

“The ‘clean fifteen’ refers to 15 vegetables and fruits that have tough inedible peels that pesticides won’t penetrate, making them perfectly safe and healthy to buy nonorganic, which will result in considerable savings,” she said. “These include produce, such as bananas, avocados and mangos.”

Learn: Best and Worst Things to Buy Generic
Save More: 30 Things You Should Never Buy Without a Coupon

Vissers said that you can get a much better deal on shelf-stable processed foods by buying in bulk at warehouse clubs such as Costco or Sam’s Club, rather than using manufacturer’s coupons at the grocery store.

She also suggests buying baked goods at Costco. “This one may seem counterintuitive since Costco is generally best for non-perishable processed foods. However, Costco baked goods are freezer-friendly, and many shoppers swear by freezing the bulk Costco croissants, in particular, (and then defrosting them on the counter or in the oven).”

Visser said that Costco bread and muffins are cheaper than their grocery store counterparts and also freeze well. And she offered one more tip: “Finally, Costco sells many of its baked goods already frozen, and these items are even cheaper than their fresh bakery goods, even though they are the exact same products.”

Tips: 8 Bulk Food Items You Need To Be Buying at Costco This Summer
See: How Much Does a Costco Membership Really Save You?

“Look for manager markdowns,” Woroch said. “Whether you’re looking to add more Omega 3 or lean protein to your diet, you can save on chicken and fish by looking for manager markdowns — these are fresh foods that are nearing their expiration date and often marked down up to 70% off. Just make sure to cook it right away or freeze for later!”

And Rebecca Gramuglia, consumer expert at TopCashback, said that the time of day you shop can potentially help you save. “Grocery shopping at the end of the day may score you major discounts on perishable pre-made meals that can’t be sold the next day,” she said.

Be Willing To Shop Different Stores To Get the Best Savings

“Another big tip is to know where to shop,” said Michelle Keldgord, co-founder of Baking How. “For me, I always utilize Instacart when there’s a deal. Some of the coupons are $20 off $30, or $50 off $100. If there are no coupons, then I will head to Aldi or Walmart.”

Keldgord suggested that if you have other grocery stores nearby, you should check their deals, too. “Sometimes, I have to shop at multiple places to get the best deals,” she said. “For instance, a local shop has incredibly cheap produce, but their meat is expensive. So, I will go to a different store to purchase my meat.”

This article originally appeared on GOBankingRates.com: These Are the 6 Best Ways To Save at the Grocery Store, No Matter Where You Shop 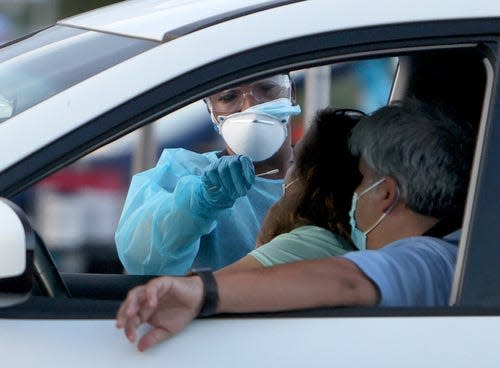