How To Get Vogue Week Pattern: Monochromatic Appears In Major Colours

The Met Can’t Fairly Outline ‘American Style.’ No matter It Is, It Appears Good.

Haseeb Rahimi, a 30-year-old Afghan entrepreneur, and his younger sister, Rahiba Rahimi, a designer, had big plans for 2021.

It was going to be the year they took Laman, their five-year-old fashion brand, international. Already, they’d staged a catwalk event at the American embassy in Kabul, outfitted the contestants for “Afghan Star” (a local version of “American Idol”) and had a runway show in Milan in 2019. Bringing their designs to Oslo (where Mr. Rahimi was in business school and planned to open a showroom), Dubai and beyond would mark the next stage in their dream of creating Afghanistan’s first modern luxury brand — one that would combine the aesthetic heritage of the country with contemporary styles, using the language of fashion to recast the image of their country in the global imagination.

The siblings had developed a network of 500 craftspeople, with 50 at the headquarters in Kabul, all led by a woman. They wanted the label “made in Afghanistan,” sewn into every piece they sold, to mean something new both within the country and outside.

But on Aug. 15, the day the Taliban marched into Kabul, they told their staff that they were closing.

“It is all wiped out,” Mr. Rahimi said by phone from Norway, referring to the company’s equipment, inventory and investment. (Ms. Rahimi and her family fled to Turkey earlier in the summer, and she was experiencing “severe depression,” he said.) “This is what happens when you dare to hope in a hopeless place.”

“Hope” rather than “style” or “money” or “trend” may seem a weird word to associate with fashion. Almost as weird as writing about fashion in the context of a war-torn and anguished country.

Yet it comes up again and again in times of trauma. In Afghanistan, fashion, with its low barriers to entry, is not so much a symbol of self-indulgent indolence as a lever of advancement. It’s a way toward financial self-sufficiency, especially for women who have been excluded from the formal academic and professional ladder. It’s participation in the global conversation and reframing of a cultural narrative.

And there, its essential role as an expression of self and antidote to horror is manifest. The drive to create beauty in even the worst of times is a universal human impulse — a statement of belief in what is possible.

As Ms. Rahimi said in an interview with The New Humanitarian newsletter in 2017, “Fashion in a way helps our women come out of their shells and tell society, ‘I am here. See me. Hear me.’”

So it was, for example, in Ukraine in 2014, when fashion week was held in Kyiv as Russian forces loomed at the border. In Israel and Gaza, where graduate fashion shows went on during the bombings the same year.

And so it was over the last 10 years in Afghanistan, as NGOs and private entrepreneurs turned to fashion as a path forward. In part that is because it is work many women could do at home while tending to their families and their traditional roles (even in areas already controlled by the Taliban).

And in part it is because of the country’s legitimate history and heritage as the center of the Silk Road, with its associated textile and embroidery artistry, and later “the Paris of Central Asia” — a moniker bestowed on Afghanistan in the stable period from 1930 to 1970 when the “afghan coat” became a Western fashion staple. (Indeed, in 1969 Vogue ran a fashion shoot titled “Afghan Adventure.”)

“Craft has always played a critical role in defining communities and cultures as well as for economic opportunity,” said Rebecca van Bergen, the founder of Nest, a nonprofit focused on building a global hand-worker economy. Nest has been present in Afghanistan since 2015 and works with a network of 6,700 craftspeople in the country, 89 percent of whom are women.

“Many artisan businesses in Afghanistan started and thrived after the fall of the Taliban in 2001, which speaks to how women’s empowerment is directly tied to both economic development and cultural preservation,” Ms. van Bergen said.

In 2016, for example, Simone Cipriani, the founder of the Ethical Fashion Initiative, a program of the International Trade Commission, a joint agency of the United Nations and the World Trade Organization, began a program in Afghanistan focused on cultivating local production of saffron and silk and run according to the principles of the International Labor Organization. Sixty percent of the 3,500 work force is female.

This autumn was supposed to herald the beginning of the next stage when, in November, a major Italian luxury brand — Mr. Cipriani would not say which one, but did acknowledge it was owned by a large French group — was going to sell 2,000 silk shawls created in Afghanistan with the support of the Italian textile manufacturer Ratti (whose clients include Louis Vuitton). It was a deal he hoped would open a pipeline for future business, legitimizing Afghan craft on the highest levels of the world stage and creating a nextgen form of industry in the country.

In 2019, the E.F.I. initiative had also connected Jeanne de Kroon, a Dutch designer who had started a line called Zazi Vintage, with a workshop in Afghanistan, the better to upcycle the lavish textiles of the country into extraordinary coats designed and sold by Ms. de Kroon.

That was the same year USAID, the United States international development organization, helped set up an exhibition in Milan at the Salone dei Tessuti to showcase the luxury crafts of the country (the products being created in part by a network of 15,000 women). It featured a runway show of four brands, including Laman, all founded by women and all dedicated to various iterations of the same mission: empowering their female base and rebuilding their country.

And that was just before Hila and Wana Limar, two Afghan sisters who emigrated with their family to Germany as young children, began to lay plans for a jewelry brand called Sevar. It was conceived to sell gold and lapis designs created and sourced in Afghanistan and built on a program to teach a trade (and business and marketing skills) to young women who drop out of secondary school. The first collection was scheduled to drop this fall, and the first class of young women had applied and been selected to begin their apprenticeship when Kabul fell.

Now, like Laman, all of these initiatives are on hold, the stories they represent whispered about with fear, the women who work with them too scared to continue.

The E.F.I. has taken down every web page that links to its work in Afghanistan and posted the statement: “Until the situation becomes clearer, we have decided not to publish any personally identifiable information linked to our work in Afghanistan. Thanks for understanding.” The USAID pages on their show in Milan are similarly gone.

“Many of our artisans have deactivated their IG accounts and asked that their names not be referenced anywhere out of fear for their safety and the safety of the artisans they employ,” Ms. van Bergen of Nest said. “With women’s rights now in question at best, and artisan businesses feeling the necessity of shutting down social media accounts and websites, the ripple effects economically and culturally are all in question. Frighteningly so.”

According to Ms. de Kroon of Zazi, the government has told the country to go back to work. But while male employees are returning to their workshop, most women are staying away out of fear of retribution if they do show up. (On Aug. 24, the Taliban issued a statement telling women to stay home temporarily for their own protection.)

Hila Limar said she was getting texts every day pleading for help and had contacted the German government in an effort to get names on evacuation lists. She was acutely aware of the fact, she said, “that I could be one of those girls. It is our responsibility to support those who didn’t have the chance to leave.” And who now cannot.

“Somebody asked me if there is hope,” Mr. Cipriani of the Ethical Fashion Initiative said. “I do not know the answer. But there is the possibility of hope.”

Bella Hadid helped Dua Lipa celebrate her 26th birthday with glitz and glamour. The model joined the “Don’t Start Now” singer for an eventful birthday weekend complete with dinners, parties and more. On one occasion, Hadid herself broke out a chic red and white checkered dress for a twist on a classic picnic table print. […] 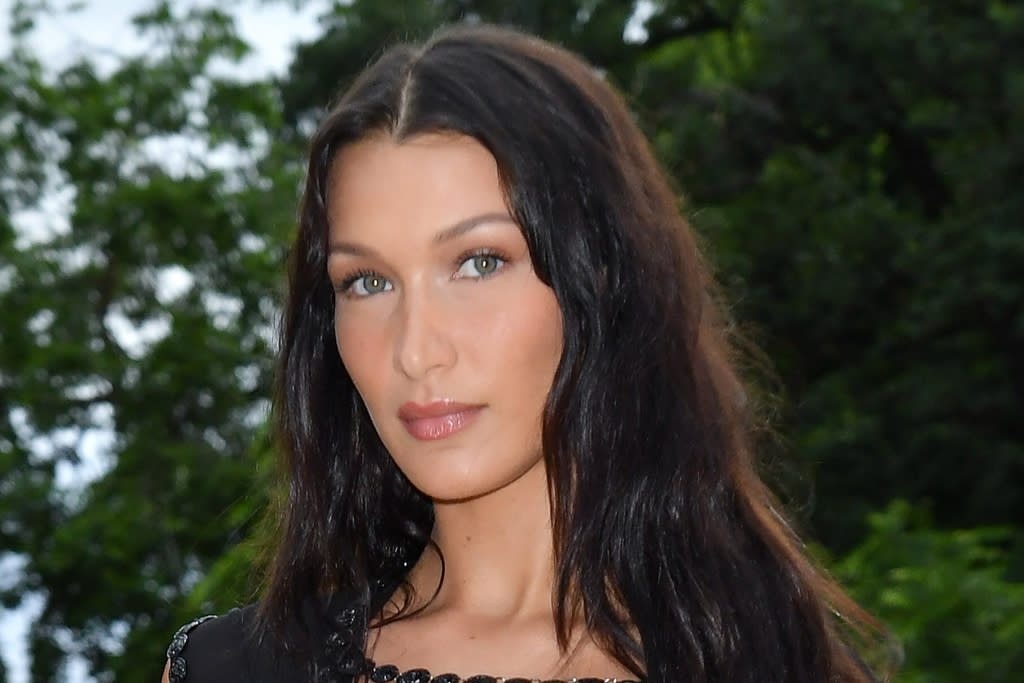 Are College Athletes the Next Fashion Stars?

As fashion brands continue to enlist celebrities and influencers to promote their products, one group that has historically remained beyond their reach is NCAA college athletes. But that has all changed in light of a recent Supreme Court decision and a dramatic change in the NCAA’s position. College athletes are about to become important representatives […]

Surrealism Is Staging a Fashion Comeback

Surrealism is everywhere (again) in fashion. The 20th century art movement that defined generations of design and literature by taking ideas of the subconscious irrational mind, and mixing them with the everyday has firmly found its place on the runway. Founded by poet André Breton in Paris in 1924, surrealism has deep roots in fashion—and […]

© Bang Showbiz Kendall Jenner Kendall Jenner has been hailed as the “biggest fashion icon” in the world. The model and reality star will launch a limited-time 72 hour capsule collection with German online retailer About You on July 25 – with a second planned for later this year – and she’s been praised by […]