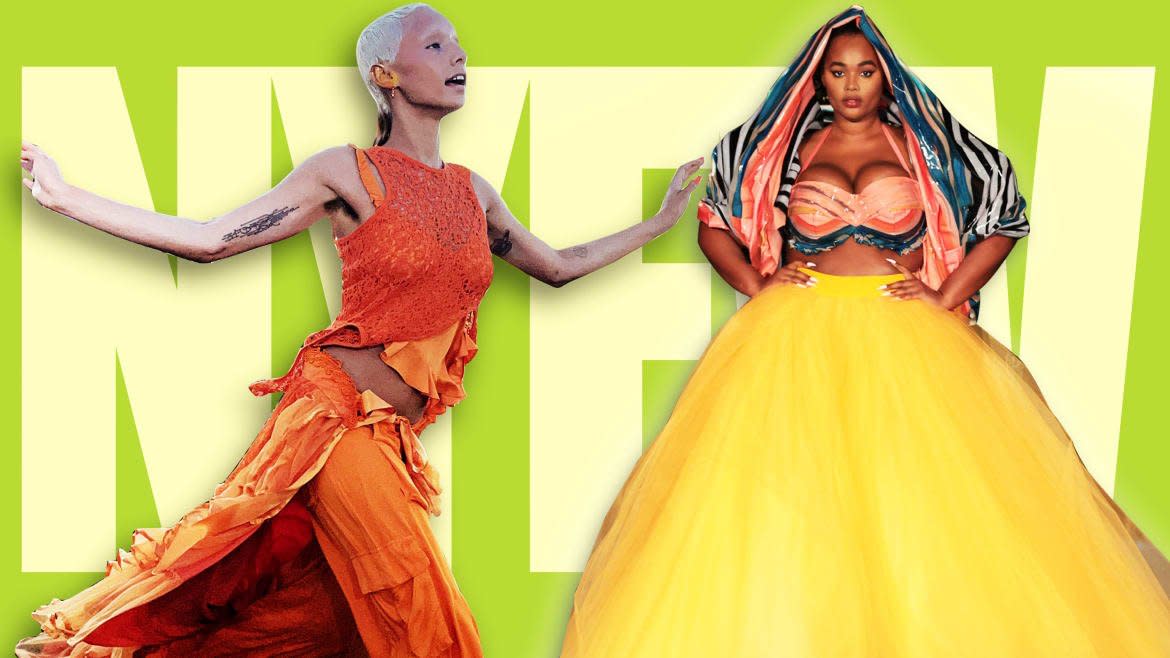 Christian Siriano took inspiration from his grandmother’s old photo albums for his spring collection, though there was nothing matronly about his sexy looks. There were corsets, thigh slits, freed nipples, and abs upon abs. It was that sort of “return of glamour” event dressing we’re all supposed to be dying to get back to these days. This looked like a “normal” real-life fashion show; Lil’ Kim, Katie Holmes, Alicia Silverstone, and Kim Petras sat elbow-to-elbow in the front row. The singer Marina sang as models sashayed through a gigantic set-up at the midtown venue Gotham Hall. It all screamed: big is back. If you can ignore the audience member who let out a loud cough right as the lights went down. Alaina Demopoulos

New York Fashion Week Is Back, and Here to Sell You Things

Harlem’s Fashion Row was back to put a spotlight on Black designers this season. The all-male roster included Harbison Studio, Johnathan Hayden, June79NYC, and Tier. This roster did beg the question of where the Black female designers were, but, nevertheless, the designers in question did celebrate their creativity using color, pattern choices, and high-fashion silhouettes. June79 showed us a modern approach to tailoring, and Johnathan Hayden wrote what he called “a love letter from isolation” that did celebrate a diverse cast of women and what we could all dress like emerging from quarantine. Kristopher Fraser

At Brooklyn Grange, an organic farm perched on top of an industrial building’s roof on the edge of Brooklyn’s waterfront in Sunset Park, in-person fashion week ushered its return to NYC.

On Tuesday evening, Hillary Taymour’s sustainability-focused brand Collina Strada showcased their Spring Summer 2022 collection—named “Snails Pace”—at the Brooklyn rooftop farm. The event evoked a sensory hallucination that rested somewhere between the mermaid parade with garden pixies and a romantic dada futuristic montage more than anything resembling a traditional fashion show. Models danced and skipped their way down the rocky catwalk, wearing a range of neon-hued ensembles that would’ve made Lisa Frank proud.

Never a brand to disappoint, the show was a barrage of cascading neon and pastel ensembles that flirted with the early Autumn wind at sunset which completed the majestically surreal effect. Sarah Shears

Claire Danes in My So-Called Life is the fashion gift that keeps on giving; a grunge slip dress, combat boots, and geek-chic floral print will always be in style. Cinq á Sept used TV’s most realistic angsty girl character as their inspiration for spring 2021, which was shown on a roof in the Financial District. Sunny, bright colors and whimsical prints were very optimistic, but the laid-back, over-it styling hinted at the nihilism of this moment. One standout: a plaid ruffle raincoat that resembles mid-aughts Kate Spade at its most adorable. Alaina Demopoulos

Read more at The Daily Beast.

Get our top stories in your inbox every day. Sign up now!

Daily Beast Membership: Beast Inside goes deeper on the stories that matter to you. Learn more.