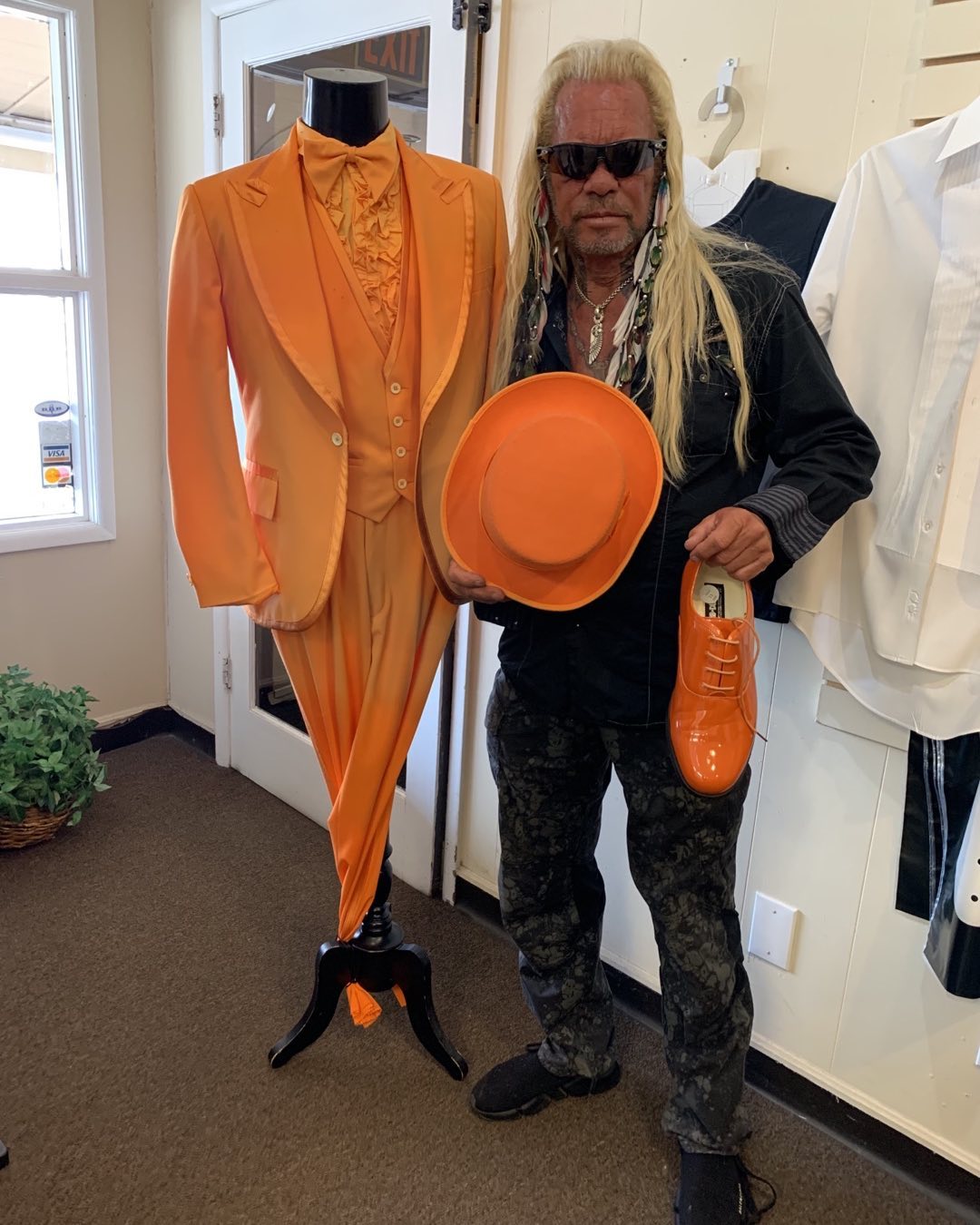 
DOG The Bounty Hunter showed off a colorful orange tux as he prepared for his upcoming wedding to Francie Frane.

The TV star – real name Duane Chapman – shared a snap of himself posing next to a suit that looks just like the one from Dumb And Dumber.

In the 1994 comedy Jim Carrey, playing Lloyd Christmas, wears a similar colorful tux to a benefit.

Dog’s tux looked identical to the one from the iconic movie, which also stars Jeff Daniels at Harry Dunne.

The reality star is set to marry Francie, 52, on Thursday.

Meanwhile, Dog’s daughter Cecily Chapman revealed to The Sun exclusively that she hasn’t been invited to his wedding.

“I haven’t gotten an invite yet.” she said.

“I’m assuming that he thinks I wouldn’t want to be there. I didn’t even know there was a date until The Sun did a story about it.”

Cecily said she would attend the nuptials – if Dog asked.

If Cecily did attend Dog’s wedding, it would be the very first time she would meet his fiancé Francie.

She claimed: “I’ve never met Francie in my life.

“I haven’t even been to the Castle Rock house since the funeral,” she added, of her mother Beth Chapman’s funeral in Colorado in 2019.

“I’ve seen my dad twice since the funeral.”

Cecily said her father’s engagement took her by surprise after her mother died following a battle with throat cancer in June of 2019.

Dog’s family, however, released a statement, saying: “Family has always been, and will continue to be, important to Dog and Francie and for anyone to suggest otherwise is untrue.”

It comes after Cecily was arrested in Hawaii for domestic violence last month.

Cecily, 28, allegedly punched her now ex-fiance, Matty Smith, in the face on July 31.

‘She punched him on both sides of his face and bit his upper back, leaving a mark with swelling and bruising,’ TMZ reported.

He reportedly told police the couple had been drinking before she became “verbally and physically abusive.”

According to TMZ, The Honolulu Prosecuting Attorney’s Office has not filed charges, but they have up to two years to do so if new evidence is found.

Cecily confirmed there was an incident but said it was an “altercation where a man struck me and said vile things about the memory of my dead mother.”

She claimed to TMZ: “I used proportional response, disabled the aggressor, and stood up for the memory of my mom. She would have handled it quite the same way, I can assure you.

“… If you put your hands on Cecily Chapman you will get your ass kicked,”

Because charges were not filed, she considered the situation “resolved.”

Earlier this month, Cecily told The Sun her wedding to Matty Smith had been canceled.

She had previously revealed her wedding date was December 1, 2021, after getting engaged on Christmas of 2018.

Cecily clarified that while she and Matty are not walking down the aisle as expected this winter, she said that the relationship isn’t necessarily over, as they are taking a break.

She added she is moving from Hawaii to the east coast, and she and Matty are “really spending time apart for a little bit.”

The 68-year-old reality star appeared on the podcast Two Guys From Hollywood earlier this month and revealed that he will be getting married on September 2nd.

Dog said during the intervierw: “We went to the venue and picked it out yesterday and looked at it- man it costs a lot to get married, my God…

However, he felt at ease when he learned from the bible that “God does not want man to be alone…”

Beth passed away in June 2019 at the age of 51 after a two year battle with throat cancer, while Francie’s husband Bob died a few months prior to that.

Last September, Dog told ET: “Let me explain this, cause this is touch-and-go. She’s not another Beth, she ain’t gonna take Beth’s place.”

In the same interview, Francie explained how they both helped one another grieve following the death of their respective spouses, as she said: “We could cry with each other and talk about what we were feeling.

“We were able to walk alongside each other through the pain and heartbreak and it brought us together in this amazing way.”

Post Views: 92
Previous post 5 Signature Looks Of Guru Randhawa That Prove His Style Is As Good As His Music